It takes special skills and experience to make such a teapot from birch bark, and the entire manufacturing process is long. We are happy to work with artisans who create such works of art for us. And as with most works of art, the motto is: good things take time!

So be patient if you want to buy a jug. The “normal” delivery time is between one and two months. Sometimes there are one or two jugs in stock.

Something about birch bark:

Birch bark: the first papyrus in the north! More than ten thousand documents from the 15th and 16th century – found in the RU – written on birch bark. It was also used for this by the Vikings.

The Indians of North America built canoes from birch bark. The insulating properties of the birch bark are enormous. That’s why you covered your wigwams with it. In winter only furs were fastened over it.

Thin birch bark was and is used as a dressing material and has been known as a natural remedy since the Middle Ages.

The triterpenes contained in the birch bark, especially betulin, are helpful in healing wounds. They serve the plant to ward off pests and to protect against UV radiation and are bactericidal. In addition, antiviral effects have been recognized, for example against HIV. Effects against malaria and tumors have also been shown.

More about the birch and birch bark 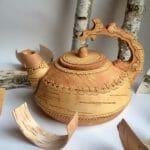