Jewellery tins made of birch bark by Angeldar

Jewellery tins made of birch bark

The birch trees (Betula) form a genus of plants in the family Betulaceae. The word birch (from Old High German bircha) is due to a term in Indo-European (*bherHgo) and means as much as “shiny, shimmering” in allusion to the light bark (cf. still Middle High German is “luminous”). Our jewellery tins made of birch bark are made of it.

Birch species are deciduous, deciduous trees or shrubs. They belong to the very fast and high-growing woods and can reach growth heights of up to 7 meters after only six years; they can grow up to 30 meters, in some cases even higher. They grow with single or often with several strains. Single specimens can reach an age of up to 160 years.

The birch – the sacred tree of Poland, Finland, the Baltic States and Russia as well as the natives of North America. Everyone knew how to use the birch bark, for example for canoeing, for jewelry, and also as a storage box, because of its antiseptic effect. As letters/documents, etc. beiaels-wise jewellery tins made of birch bark with traditional patterns.Or our birch bark.

Birch pitch produced by birch trees by smoldering and dry distillation has been proven to be the first systematically produced plastic in human history for the permanent joining of stone wedges, plant fibres and wooden handles, both by Neanderthals and by modern humans. Or today, an ingredient is produced against HIV or cancer. This is due to the BITOLIN in the birch bark.

Young designers revive this old craft tradition. With shapes and design. But quality cannot produce a machine. For this you need the traditional knowledge/skills that our partners have for generations!! 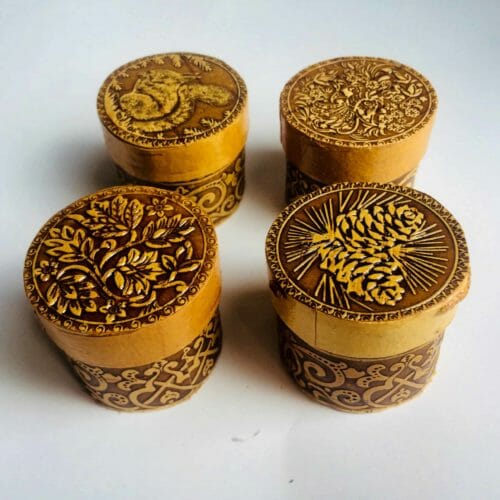 Jewellery tins made of birch bark by Angeldar