The jojoba bush is an evergreen plant with heights of 2 to 5 meters. It grows in semi-deserts and deserts. the jojoba bush is planted as protection against erosion. There is only one species in the caryophyllales family. It is not uncommon for jojoba bushes to live to be 150 years or older. Original home is Mexico, California and Arizona in the area of the Sonoran Desert. Today jojoba is grown commercially in Israel, Egypt, Jordan, Argentina, Peru and Australia, in addition to the USA. Primavera organic jojoba oil comes from Peru.

Compared to other medicinal plants, the history of jojoba oil or the jojoba plant is still quite young. It was first mentioned around 1716 by Spanish missionaries. The plant did not become really known until 1789 with the publication of the book Storia Della California . It was there that it was described in detail for the first time and became known to a wide public. The jojoba oil was not even analyzed for the first time until 1895.

The jojoba oil is actually a wax which becomes liquid from 12 °. It increases the retention capacity for moisture in the skin, penetrates quickly, is suitable for all skin types and has a high content of vitamin E, minerals and natural nutrients and care substances. Indians and Aztecs used jojoba oil as a panacea for skin diseases, eye and sore throats, among other things. It was also used for skin and hair care.

Jojoba oil has a sun protection factor of three to four and promotes an even, long-lasting and natural tan. You can also use jojoba oil as a day and night care oil. In the event that your skin itches, tightens, flakes or lacks oil and moisture, using the oil will revitalize and regenerate it in a natural and beneficial way. The jojoba oil provides more moisture protection, tightens your skin and counteracts the formation of wrinkles.

The hair application of jojoba oil has a long history and has been used with success by some Native American people. The difference to some other hair care products is that the oil does not cover the hair like a heavy film. Instead, its active ingredients are drawn into the hair and work from the inside out. So jojoba oil can restore hair make it look fresh and shiny and combat dandruff . In particular, the ends of the hair can be used protect against split ends and frizz or can even be repaired with it. This principle has long been used in cosmetics. This is why some products contain extracts from jojoba oil. However, you should use pure jojoba oil for your hair, otherwise the positive effect will be weakened. 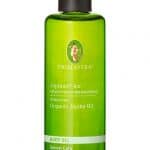