Part of the plant: pulp / seeds

The sea buckthorn reaches heights of 1 to 6 m and is a deciduous shrub. Sea buckthorn ( Hippophae rhamnoides ), also Pheasant berry , Haffdorn , Sea thorn called, belongs to the family of the oleaginous plants (Elaeagnaceae). The sea buckthorn actually comes from Nepal and reached Europe and Asia during the last ice age. The organic sea buckthorn pulp oil from Primavera comes from Germany.

The sea buckthorn is known for the high vitamin C content of its fruits. The orange-red fruits contain more vitamin C than a comparative amount of lemons. The fruits are not very tasty raw, they are too sour and tart. On the other hand, they taste very good in processed form.

The orange-red oil regenerates, strengthens, soothes the skin and has an anti-inflammatory effect. Particularly effective on mature skin and soothing on dry and chapped skin.

Something about the oil:

Two different oils can be obtained from sea buckthorn. On the one hand, oil from the pulp. This is thin and due to the content of the carotenoid, colored orange to dark red. Sea buckthorn pulp oil smells fruity sweet and tastes typical of sea buckthorn.

The Sea buckthorn kernel oil contains less color and is therefore almost colorless. However, unlike oil made from pulp, it contains more unsaturated fatty acids. Its smell and taste are as neutral as its appearance.

Both sea buckthorn oils contain vitamin E. The oil from the pulp also contains vitamin C and, a rarity for plants, vitamin B12, which is otherwise almost exclusively found in animal products. Further ingredients of both sea buckthorn oils are minerals, trace elements and secondary plant substances. As with all oils, the calorie content is very high at 900 per 100 ml. The majority consists of unsaturated fatty acids. Accordingly, sea buckthorn oil is one of the healthy types of oil. 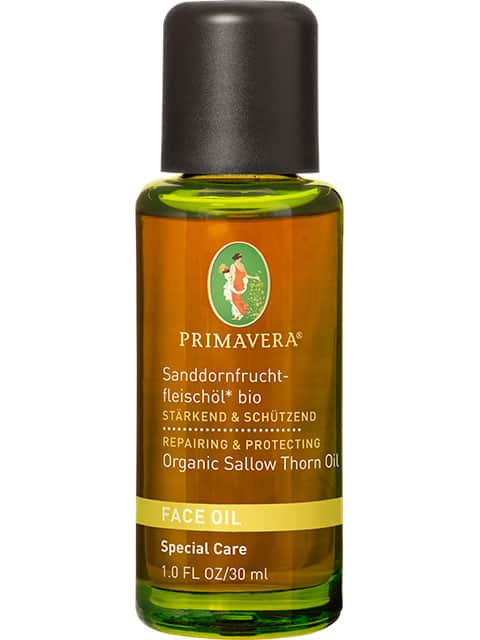