Styrax absolute
The Amberbäume (Liquidambar) are a plant genus in the small family of Altingiaceae. Liquidambar species grow as deciduous trees and reach heights of growth of 20 to 35 meters, the maximum diameter is 1.05 m. The botanical genus name derives from the Latin word liquidus for liquid and the Arabic word anbar عنبر for amber. The name Liquidambar means liquid amber. The Oriental sweetgum (Liquidambar orientalis) is native to southwest Turkey, Syria and Rhodes. On Rhodes are known about five growth places, of which the valley of the butterflies is the most well-known .. In the red listing of the IUCN the kind is listed as “endangered” (vulnerable, VU).

The resin of the Amberbaums is usually called “Styrax”, Turkish “gunluk” or “sigla”. It is formed after injury of the bark. It is harvested from March to September by trees with a circumference of about 15 centimeters, then about 10 years old. From this resin Styrax Absolue Essential Oil is distilled.

Resin, stems, leaves and fruits are used medicinally. The resin was and is not only used for healing purposes. For example, in the Greek Orthodox Church it serves as the most important incense in religious ceremonies. Even in paganism Styrax was a popular smoking. The traditional production of Styrax incense is very common in Asia.

Styrax is one of the oldest smoky resins in the world and was even more popular than frankincense and myrrh 1000 years ago. Today one discovers the advantages of the balsam resin won from the Amberbaum gradually again, whereby the resin finds above all to the aromatherapy with respiratory illness use. In addition, Styrax’s sweetish heavy smell successfully sells insects and pests. For meditation and relaxation, the resin is also suitable.

Before using it internally, consult the reference books, doctor or aromatherapist. 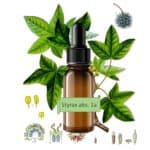