Rosemary is a small taxonomic group of woody, perennial herbs with fragrant evergreen needle-like leaves from the Lamiaceae family, native to the Mediterranean. In 2017, the species of the genus Rosmarinus were classified into the large genus Salvia on the basis of taxonomic evidence. Thus Rosmarinus is no longer a genus, but still a monophyletic group of species within Salvia. The name ‘Rosmarin’ derives from the Latin ‘ros marinus’ and means ”Tau des Meer”.

The essential rosemary oil forms different types of chemo depending on the location, altitude, climate and soil, which differ in completely different ingredients and modes of action.

According to the European Pharmacopoeia, rosemary oil exhibits antimicrobial activity against numerous bacteria, yeasts and moulds and has a blood circulation-promoting effect on the skin.

Rosemary oil destroys the dangerous bacteria Escherichia coli and Staphylokokkus aureus, which are known for their resistance to antibiotics. Therefore, colourless and odourless components of rosemary oil are often used as preservatives in perishable foods, including meat and sausages. In countries of the European Union it is allowed to use up to 400 mg of rosemary extract per kg of food.

ATTENTION: DO NOT use for SMALL CHILDREN, WOMEN and HIGH PRESSURE!! 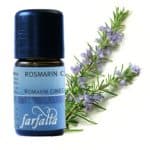