is the aromatic rubber resin of several species of the genus Commiphora from the family of the Balsa tree Family, the thorny shrub becomes up to three meters high. Myrrh is a tree resin that has been used and appreciated since ancient times for its medicinal and spiritual applications. Just as for its cosmetic, aromatic properties. In Christianity, gold, incense and myrrh were given by the three wise men as a gift to the Child Jesus MT2,11.

Myrrhe Essential Oil is most commonly used for spiritual and incense/space applications.

Myrrh has always been very popular. In fact, myrrh can already be found in the so-called Papyrus Ebers, one of the oldest Egyptian medical texts from 1550 BC.

Both the myrrh resin and the oil have a long history in medical use. In the past, it was mainly appreciated that the wound-healing properties of this remedy were appreciated.
The ancient Egyptians used myrrh to treat hay fever and herpes with it.

The myrrh oil was also used for religious rituals and ceremonies, as can be seen from records over 5,000 years old

Since the Middle Ages, “pest pills” have been produced in Europe from the myrrh resin (according to Avicenna with aloe and saffron). For example, these pills were also given a fever-lowering effect, as were other health-promoting properties.

This wonderful soft and fine fragrance is therefore often used as a top note of perfumes and harmonizes with orange.

About 13kg of resin is needed, for 1ltr. essential oil

Before a physical application, consult specialist literature or doctor or aromatherapists!

The effect on the soul is: Relaxing, Calming, Mentally Strengthening, Harmonizing. It also helps with depressive mood, and many more. 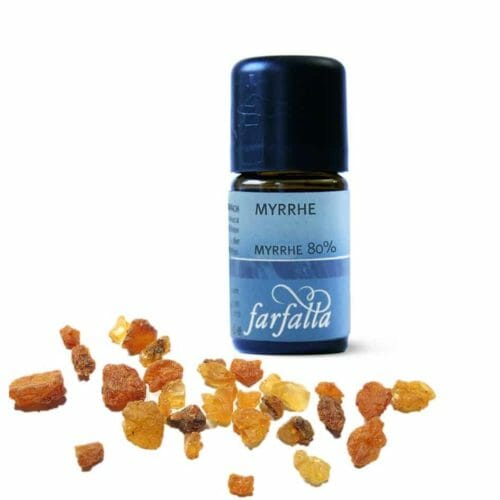