is the aromatic gum resin of several species of the genus Commiphora from the balsam tree family (Burseraceae). The thorny shrub grows up to three meters high Home: mainly in North Africa. Myrrh WS comes from Ethiopia, Somalia.

Myrrh is a tree resin that has also been used and valued for its medicinal and spiritual applications since ancient times. Just as for its cosmetic, aromatic properties. In Christianity, gold, incense and myrrh were given by the three wise men as a gift to the Child Jesus MT2,11.

Myrrhe Essential Oil is most commonly used for spiritual and incense/space applications.

Myrrh has always been very popular. In fact, myrrh can already be found in the so-called Papyrus Ebers, one of the oldest Egyptian medical texts from 1550 BC.

Both the myrrh resin and the oil have a long history in medical use. In the past, it was mainly appreciated that the wound-healing properties of this remedy were appreciated.
The ancient Egyptians used myrrh to treat hay fever and herpes with it.

The oil of myrrh was also used for religious rituals and ceremonies, as can be seen from records dating back over 5,000 years.

Maintaining healthy skin is one of the primary uses of the oil. It prevents the signs of aging from appearing too quickly and clearly, and it soothes chapped skin. Stir 1 drop well into face creams.

Myrrh was already used by the Egyptians for embalming and smoking more than 3000 years ago.

With the myrrh resin (according to Avicenna with aloe and saffron) “plague pills” were made in Europe in the Middle Ages. For example, these pills are said to have an antipyretic effect, as well as other health-promoting properties.

Smyrna is the Greek name for myrrh.

When Smyrna – impregnated by her father, King / Priest Kyniras of Cyprus – gave birth to her son Adonis, she turned into a myrrh tree. Such is The Greek Mytology.

TIP: In the diffuser with lavender or palmarosa or sandalwood Mix.

Do not use on pregnant women!

The effect on the soul is: Relaxed, calming, mentally strengthening, harmonizing, helps with depressive moods, and much more 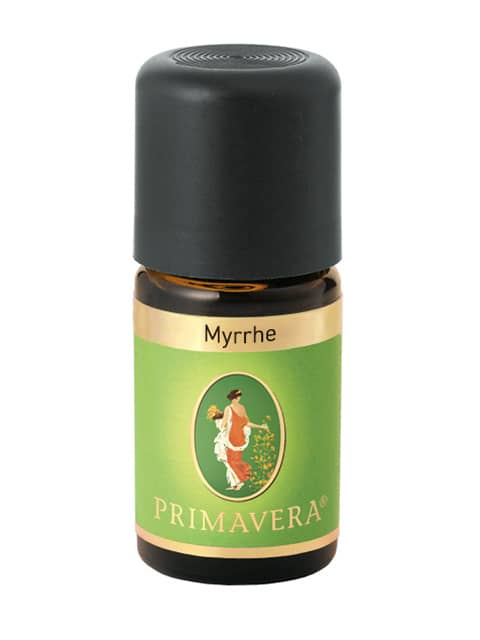