.In Central Europe is the coastal fir (Abies grandis) or giant fir, one of the most important foreign wood species from a forestry point of view, especially in the Atlantic climate. Primavera organic giant fir comes from France.

Seed reached Germany for the first time in 1833. Cultivation trials by the forest research institutes founded at the end of the 19th century. The largest cultivation areas can be found today in Rhineland-Palatinate, Schleswig-Holstein and Lower Saxony.

Natural area of origin : is western North America, stretches 1,400 km along the Pacific coast from Vancouver Island and British Columbia via Washington and Oregon to northwestern California. An eastern sub-area is located in the southeast of British Columbia and extends as far as Idaho. Occurrence at altitudes between sea level up to 1,600 m (western area) and 400 to 2,200 m (eastern area) The coastal fir is an evergreen tree that grows up to 85 meters and trunk diameter (BHD) of usually 1.55 rarely up to 2.5 meters reached. Their maximum age is 300 years.

From about 140kg branches you get 1 ltr. Oil

Giant fir oil works very well with other essential oils such as: B. with lavender or Cedrat to use. 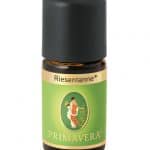