The fenugreek (Trigonella foenum-graecum) belongs to the subfamily of the butterfly-flowers (Faboideae) within the family of the pod-breeder (Fabaceae). It grows as a one-year-old herbaceous plant, with growth heights of 30 to 80 centimetres. It is also known as Greek hay, cow horn clover, goat horn, deer wandweed.The fenugreek is spread across southern Europe, Africa, the Middle East, India, China and Australia. Today, the fenugreek is wild as far south and as middle Germany

Fenugreek is an ancient plant already listed in the Papyrus Ebers ,(a medical papyrus from ancient Egypt).

Both the seeds and leaves of the fenugreek are popular ingredients in Asian, North African and Southern European cuisine and are widely used, such as the leaves as vegetables, the roasted seeds in curries and chutneys, soups and vegetable dishes, fish and meat dishes, drinks and as flour for baked goods. On the other hand, the majority of seeds in this country are processed in the food industry, although the production of sprouts is rather of minor importance.

Seed powder plays a major role in the production of spice mixtures; it is a typical component of curry powders, but is also offered “pure” as a seasoning powder. It is also found as an ingredient in numerous mustard specialities. Extracts from the seeds are also added as a flavouring sauces such as soy and fish sauces. In sliced cheese, the addition of fenugreek seeds is used to add a nutty touch to the cheese. In addition, products made from fenugreek seeds are contained in teas such as “still teas” and are increasingly also offered as dietary supplements.

The use of fenugreek seeds for health purposes has a long tradition in India and North Africa.

It ranges from use in pregnancy, obstetrics and lactation to use in skin conditions, gastrointestinal discomfort, beie dents, to use as a tonic, aphrodisiac and hair loss agents

In Ayurvedic medicine, fenugreek seeds are used in arthritis, spondylose and as adjuvants in diabetes mellitus and hyperlipidemia.

In German-speaking countries, the healing effects of fenugreek seeds were first described by Hildegard von Bingen. Sebastian Kneipp was convinced of the effects of the drug and was committed to its medical use. In the last 50 years, however, fenugreek seeds have not been of great importance in German phytotherapy, and there is currently no ready-to-use drug containing the drug.

In France, Poland and Spain, on the other hand, fenugreek seed preparations have been on the market for many decades as medicinal products and in Belgium and Italy as dietary supplements

Internal use can cause gastrointestinal discomfort. Diabetics need to be especially careful, as fenugreek shards. can reduce blood pressure. They should therefore keep an eye on their blood sugar levels. During pregnancy, it is better to abs on fenugreek. because they can affect the natural hormonal balance.

This is particularly suitable for the care of inflamed and sensitive skin areas. It can be used for envelopes as well as for easy care of these skin areas. The oil can also be helpful for acne and skin impurities. 3fenugreek abs. mix in body oil such as almond or jojoba oil so as not to irritate the skin. The use of essential oil on inflamed skin areas should therefore be discussed with a doctor. 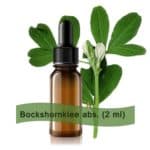