The Real coriander ( Coriandrum sativum ) is a plant species and is also an umbelliferous plant (Apiaceae). It also grows mainly in Europe. Other names are, for example: Arabian parsley, wall louse herb, bug bugs, bug bugs or bug cumin. Coriander grows as an annual herbaceous plant. The height of growth is between 30 and 90 cm depending on the location, variety and use. From the Primavera oil is obtained from coriander seeds.

By the way: an essential oil is distilled from coriander leaves, which is not as strong and smells fresher and more exotic.

The plant has been used since 5000 BC. The seeds were also used in ancient Egypt; they were found during excavations, for example in the tomb of Tutankhamun. Coriander was also known to the Romans. It was mentioned in China as early as AD 400 and in Great Britain in 1066. In the 15th century it spread across Northern Europe, where coriander was used for perfume in the 17th century and was one of the first herbs to be introduced to North America by immigrants in 1670.

TIP: If you want to apply coriander oil to your skin, please never do it in its pure form, as the oil can be extremely irritating to our skin. It is recommended to use the oil in a suitable carrier oil, such as Apricot oil, to solve. Simply add 10 drops of coriander oil to 10 ml of apricot oil and then apply the mixture to your skin.

Coriander oil has a physical effect: Balancing, relaxing, strengthening nerves, promoting sleep, stabilizing, promoting concentration. On top of that for loss of appetite, stomach and intestinal problems, constipation. In addition, for bacterial angina and bronchitis. 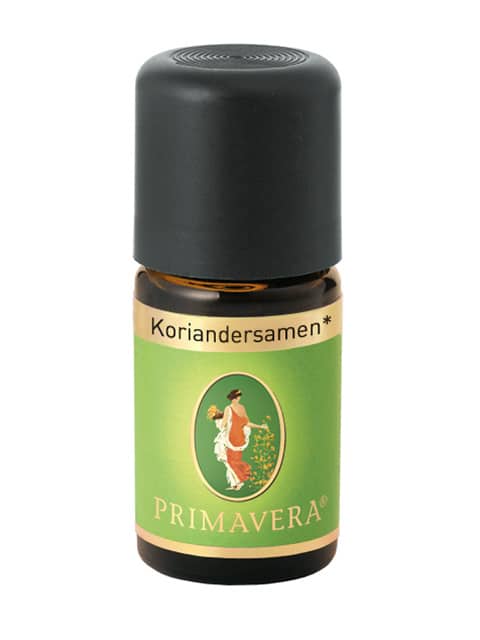