The home of the Copaiva tree (Copaifera officinalis) is Central and South America. It can grow up to 19 meters in size and is a member of the family of butterfly flowers. The essential oil is extracted from the logs. Holes are driven into the trunk, which reach into the marrow, so that a liquid is released, which one collects. A single tree provides up to 50 litres of this liquid, but then you close these holes again so that the tree does not die.

The scientific name means “”copal-bearer” (or more precisely copaibacarrier), as they can be used to extract economically important resins and essential oils. Copal is still used by a number of indigenous peoples of Mexico and Central America as incense at ceremonies in sweat huts and at ceremonies with sacred mushrooms.

Copaivabalsam also known as Jesuite balm (Latin balsamum Copaivae),also known as “Copaiba oil” and “copahu”, was a balm of the drug trade of the 19th century. It comes from various species of the genus Copaifera, which have their home in South America and on the West Indies, as well as from Daniellia oliveri, Daniellia thurifera (African cobaivabal tree, also as illurine balm) and also from Sindora spp. (Sindora wallichii), Eperua spp. (Eperua oleifera).

TIP: Stir two drops a day into a coffee spoon of honey and dissolve in a glass of lukewarm water or herbal tea.

Copaiva balm is easy to mix with: vanilla,also with orange and mandarin

The Copaiva balm is considered a universal pharmacy in the Amazon: 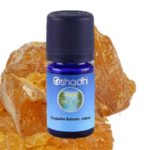