The Ceylon cinnamon tree or Real cinnamon tree ( Cinnamomum verum ). Cinnamon belongs to the laurel family (Lauraceae). It’s evergreen and the bark is peeled every two years. Farfalla essential oil is made from this cinnamon bark. The real cinnamon tree grows up to 18 m high, in culture the trees are pruned so that twigs and branches form, the bark of which can be used for cinnamon bark extraction

Real cinnamon “ comes from Sri Lanka (Cylon) and does not contain any coumarin. Today this species is grown in many tropical countries. The species is feral in tropical Asia, the Caribbean islands and the Seychelles. The flowers and leaves as well as the bark are used. The essential oil of the leaves has fewer indicators – but is more skin-friendly than cinnamon bark oil.

The cinnamon oil with the best fragrance is obtained from the cinnamon bark. The essential oil smells warm, sweet and spicy. It strengthens personal protection and supports meditation. It has a warming and relaxing effect during stress and anger.

In 1502 the Portuguese Vasco da Gama brought this spice to Europe.

Nowadays, however, the inexpensive cassia cinnamon is used more and more often instead of the real cinnamon – the simple reason for this is that “real” cinnamon is much more expensive.

Cassia cinnamon, which comes from the cinnamon cassia, the Chinese cinnamon tree, comes mainly from China (known for 3000 years), Vietnam and Indonesia. Sometimes it has a high proportion of coumarin, which can be hazardous to health. The “Kassia cinnamon varieties” as well as other low-quality cinnamon are also called Wood cinnamon designated.

It may only be used very diluted on the skin as it is irritating to the skin. Use very sparingly due to its intensity. Avoid during pregnancy. 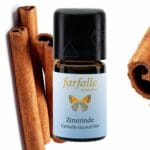