The Alant species are mostly persistent plants, some – of more than 100 – are shrubs. The different species are of very different sizes, from tiny to high perennials that reach over 3 meters in height.

Echter Alant is native to Small and Central Asia. It is also native to Spain and also to France. Today it is grown in Germany, Holland and the Balkans. It prefers slightly moist, semi-shady locations. It is popular in societies of the subclass Galio-Urticenea and the Arction Association.

Alant is already mentioned in Egyptian papyri. In Roman-era Spain, the plant was known as ala after Isidor of Seville. He describes the root as aromatic, the leaves as sharp.

Predominantly used part is the root (Helenii rhizoma). Alant is one of the medicinal plantsknown since ancient times. In Dioskurides and Pliny, “Helenion” is recommended for coughs, convulsions and stomach weakness

Some species have been cultivated for centuries.

The bulbous root (called rhizome) of the beautiful mini sunflower tastes just as much as iris oil smells.

Its essential oil is very precious and rare, it acts as one of the strongest vegetable mucus dissolvers. So ideal for bronchitis with firmly sedentary and sinusitis (sinus problems).

Mix well with Mandarine, also with herbaceous oils such as Cajeput, on top of that with spicy oils such as eucalyptus, ravintsara, and cinnamon-blaetter-biot.

The oil is good against respiratory diseases such as cough, cold and asthma as well anti-viral, mucous and liberating 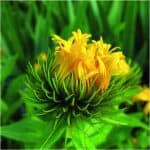