The name Ajowan comes from a Sanskrit word and means Greek. In ancient Greek writings, this herb is called Ammios and in Hindi Ajvain. Also known in Europe as king cumin. It is a spice and medicinal plant of the family Apiaceae.

Ajowan is a one-year-old plant that can reach a height of up to 50 cm in good conditions. The white flower domes of the Ajowan are popular with bees and bumblebees. The plant probably comes from the eastern Mediterranean area, possibly from Egypt. It has been cultivated since antiquity and reached India in early Hellenism. (Some authors also indicate India as the country of origin). The most important growing regions today are Iran, India, as well as Pakistan and Afghanistan.

Ajowan has a strong, thyme-like aroma. It is used as a spice in Arabic and Indian cuisine. The dried fruits of the Ajowan have a strong thyme aroma and therefore taste burning-aromatic.

They are used as a spice. In Indian cuisine, they are often added to starchy vegetables such as potatoes. Legumes, which play a major role as a source of protein in India, are very often seasoned with ajowan, making them more digestible. It makes sense to fry the seeds briefly in butter or oil and then add them to the food. Taste-giving compounds are thus dissolved and better distributed in the dish. The aroma is noticeably enhanced.
As a seasoning for soups, bread and all kinds of pastries, for roasted apples or cheese you could use the seeds of the king’s cumin instead of our local cumin (Carum carvi). In this way, new, special dishes and cooking variations can be created.

Ajowan is often used as a medicinal plant in Ayurvedic medicine in India, especially against digestive problems and fever.

The ajowan oil obtained from the fruits (Fructus ajowani) by distillation used to serve as a commercial source of thymol, but today is produced synthetically.

In Western medicine, thymol, the main component of ajowan oil, is used in medicines for colds.

It is intended to help with: asthma and indigestion, as well as against bloating stomach diseases and diarrhea. In addition, is highly anti-inflammatory and known as an antiseptic. In mouthwash against inflammation in the throat. 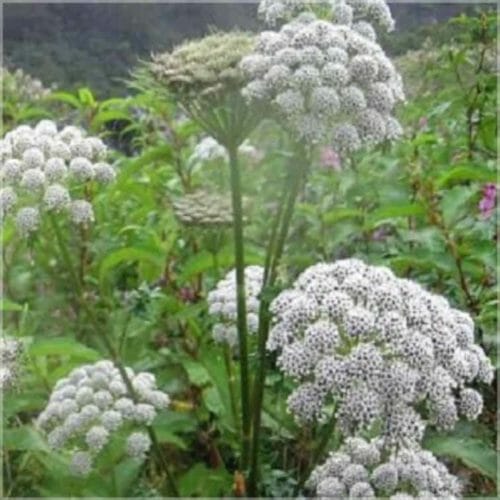