Because it is used as a medicinal plant, St. John’s wort oil is grown organically. The slightly reddish oil soothes the skin and soothes irritations. To make organic St. John’s wort oil products, flowers, buds and even leaves can be put in a preserving jar together with a high-quality carrier oil such as sesame or olive oil. The jar is then placed in a dark and warm place for at least 5 weeks. During this time, the carrier oil draws all of the biologically active ingredients from the St. John’s wort and turns a deep red color.

The tradition of St. John’s wort goes back to the time of the Celts and Teutons, the five-pointed yellow flowers are reminiscent of a druid emblem, the red color of the blood of Odin, the father of gods of the north. 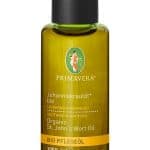